THE CROSBY BAR at Crosby Street in SoHo, NY

I was in SoHo for work related issue when I absolutely needed to eat lunch at 1:30PM.  The places I wanted to go were closed to my surprise while the others were either full or I've been to before.  I have always passed the back part of this restaurant before where they have a glass elevator outdoors so I walked down to explore. http://www.yelp.com/biz/the-crosby-bar-new-york#hrid:k71XuNlWyB2xQIImTYir6w 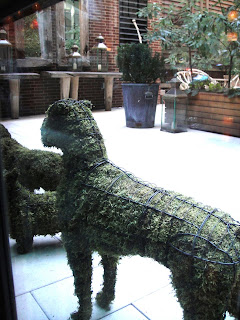 I chose a seat right next to the doors that open to the mirrored terrace with a beautiful garden and topiary with dog images.  What a cute idea! 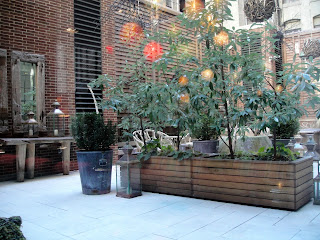 Except for the winter, they probably allow you to sit outdoors.  The colorful circles you see are a reflection of the lights indoors.
Below are some of the food I ordered.  This was late lunch so I opted for their cauliflower soup with black olive-walnut gremolata and a couple of small plate dishes. 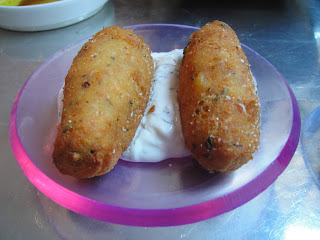 On the left is the cheddar jalapeno fritters with dill garlic labne.  It's quite good. 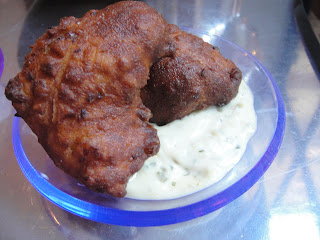 On the left is the Shrimp bennett gribiche with a wonderful sauce.  Below is when you cut it up. 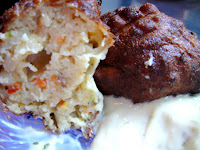 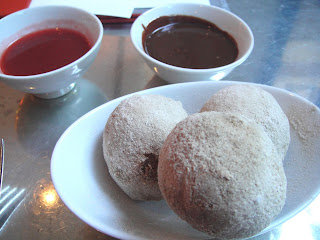 Above, is the cinnamon doughnuts with berry and chocolate dipping sauces
This was my dessert.  I didn't realize that what I've ordered were all pretty much an assortment of fritters.  They were all in the croquette family with a variety of ways to prepare them; except for the soup I ordered.
The ambiance was gorgeous and the service was great.  I like the decoration more than I liked the doughnuts.  I probably should have ordered a different dessert.  I'm not a fritter freak.
Posted by foodyholic at 3:00 PM