First I picked paper plates with the little girl's favorite Frozen - the movie. 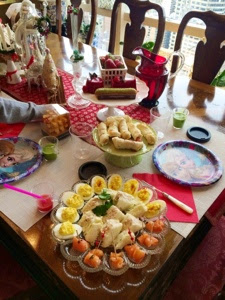 The night before, I made chicken sandwiches cut in quarters to form triangles; and cucumber sandwiches cut up in 6.
I rolled the cheese and ham in the soft thin slices bread and twines it. Then I brushed it with melted butter and baked it at 359 degrees till golden Brian and turned it on the other side. Each side about 4 minutes. ( baked this on the day)
Deviled eggs were made as well and on the day, I rolled smoked in cream cheese.  For some reason, this was the favorite of the 2-4 year olds!
I served mini desserts with red colors and green and a small basket of stemmed strawberries.
Drink:  blood orange juice and peas soup in little cups.
Then they opened their presents!
And the 4-year old said: "Best Christmas ever!" 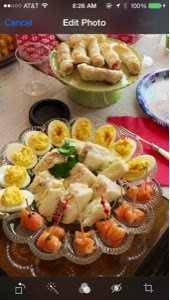 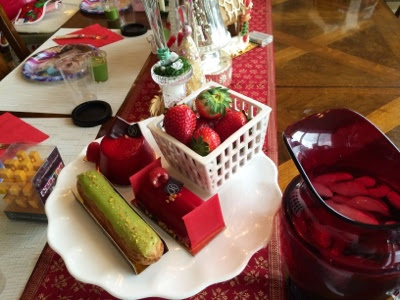 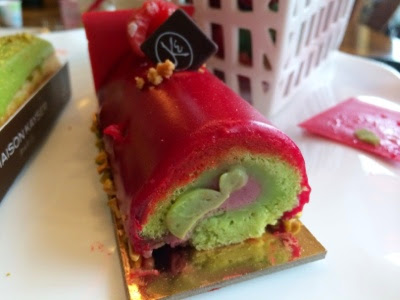 Children were happy!
Posted by foodyholic at 7:20 PM 0 comments

A rainy cold night in Greenwich Village looking for somewhere to dine is not easy. But we lucked out and the place looked crowded which is a sign of a successful tasty restaurant.  The only accommodation was at the bar - but as long as we can order our dinner and eat at the bar, we really don't mind. 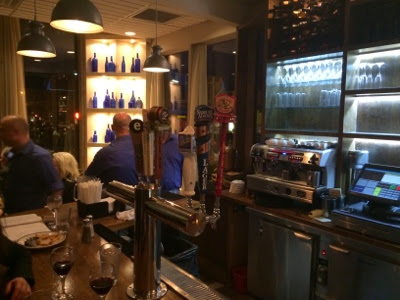 Above is the bar area we sat down to order. 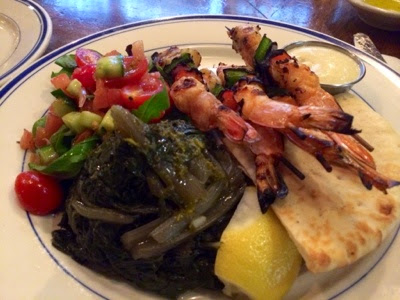 About 30 minutes later, my order arrived. This is the shrimp kabob which comes with a salad a a choice of your side order.
My side order was the vegetable rice below. 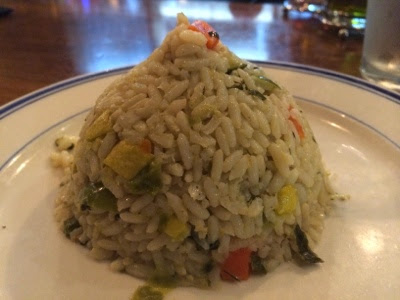 This is plenty of food. But you can take it back home. I'm having mine for lunch or make some lamb chops with my rice and left over vegetable. I can't wait!
Posted by foodyholic at 2:09 PM 0 comments 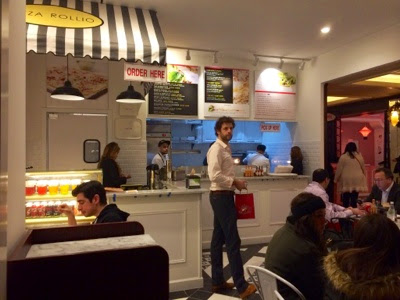 This is not your ordinary pizza.  It's like a cracker that has crisp edge and soft by the center. They serve their pizza sliced diagonally to make rectangles about an inch wide so you can roll them when you eat it. Hence Pizza Rollio.

Their most popular order is the Big Bang Supreme which has pancetta, ham, pepperoni, onion, mushroom and mozzarella.  This order comes with a little bit of arugula and greens you assemble on top of each slice then roll to eat. It reminds me of a fresh Philippine egg roll using a thin dough similar to an Italian Piadina - a very thin Italian bread that you heat in very hot oven or toaster oven  to put cold cuts on and eat.

Since I can already visualize the flavor, I opted for Imeldific - their pizza version with mentaiko (spicy cod roe) which is not really that spicy. It just has a little spike. This pizza Rollio has some dab of secret cream they first bake in their hot oven and then some mentaiko spread here and there which creates the flavor.  It also has some peeled slices of cucumbers, and sparingly sprinkled with minced or chopped chives.  You roll each slice to eat it but it doesn't come with greens.  To me this was more like an appetizer portion but it tasted very good. 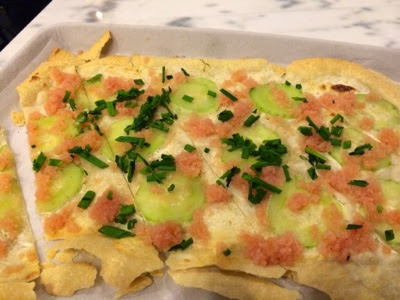 They added a new salad in the me in this afternoon which is arugula with  some slices of smoked salmon served with a mustard dressing which reminded me of the Scandinavian gravlax sauce , only less thick.

The place is innovative using existing ingredients modified to create a new look and it works!  Perhaps, I could rate this with 1 more star if not for the hefty price considering the fact that I am not being waited on.

At least if you are staying away from carbs, this may be your answer to the usual pizza.  But to me this is more of a cracker than a thin pizza with a softer center. It's a melting pot or fusion of fresh Asian roll, Italian pizza and other ideas from other nations like the gravlax dressing instead of a sauce on one's salad mixed into one dish. 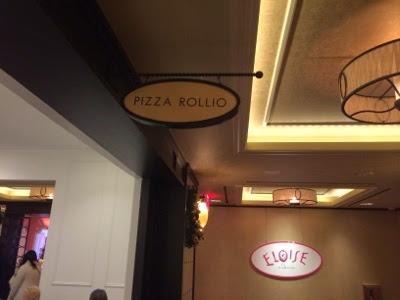 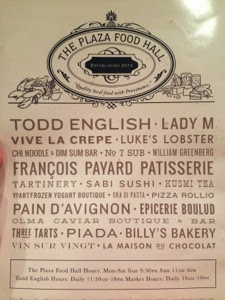