Located in the Lower East side of New York City is this Chinese restaurant where the style has been tweaked to a different level but still bearing the flaovrs of China.  Although it's been described as American Chinese, it should not to be confused with "suburban" Chinese food.  It is a breed of its own using Chinese seasonings in a different level.  You have to try it in order to judge it.

I believe, this restaurant was named after Mission Street where its main restaurant is located in San Francisco bearing another name.

When you enter the restaurant, there is a long corridor where you can watch the chefs cook.  At the end is a red curtain that opens to another corridor with steps up to the restaurant. (Sort of a mysterious destination) 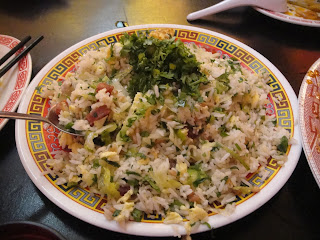 What we ordered:
﻿I particularly liked the fried rice with salted cod, Chinese sausage and lots of chopped parsley.  ﻿It was well seasoned and had a clean taste.  But do not confuse with typical Chinese fried rice.

It somewhat reminds me of Malaysian style fried rice except in this case, they used salted cod instead. 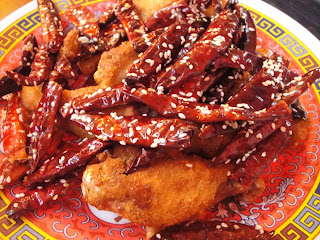 The spiciest of all we tasted was the fried chicken - mostly wings and some small drumsticks.  I personally did not like the strong powdery seasoning that was on this chicken dish.  I think it was a bit powerful.  It left my lips tingly and throbbing.  Others like it.
The restaurant donates 75 cents from every large plate to the Food Bank for New York City.
Ordering 3 items is not enough for me to make a judgment.  I need to go back one more time and try more things in their menu.

Winner of Top Chef Masters 2011 Floyd Cardoz opened North End Grill in downtown Manhattan this year and has been a popular restaurant since.  Originally from Mumbai, India, he loved food and his determination to perfect it shows at his restaurant.  http://floydcardoz.com/news/ny-times-12-20-2011/
﻿﻿
Below are some of the dishes that we ate at his restaurant for lunch.  Although his menu changes, I simply want to share and give you an idea of what we had. 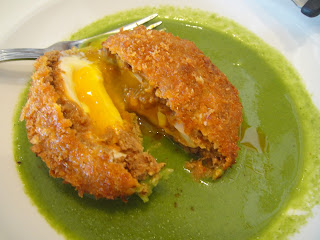 My first course was Floyd Cardoz'es interpretation of Scotch Eggs.  He is very proud of the fact that the yolk is still runny which is hard to achieve when you deep fry it.  It is served on a vegetable puree.  It is balanced and has a delicate flavor.

This could be an interesting selection for brunch if it would be in that menu - I'd pick it. 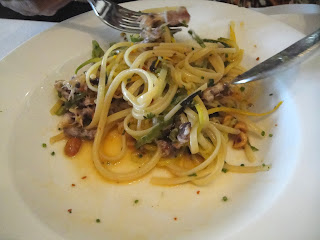 My friend ordered the baby squid dish which she enjoyed very much.  We've never seen squid as tiny as this.  He said it comes from Europe and is seasonally imported. 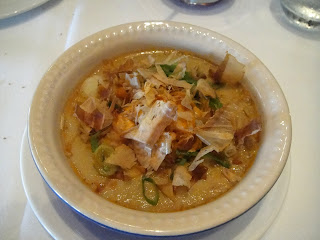 My other friend had the King Salmon with quinoa and carrot puree and cashews who thought was divine!

Not pictured, is my order of Lobster egg custard with sea urchin.  (Japanese name for sea urchin is Uni). It was his interpretation of a Japanese warm custard dish.  I loved it! 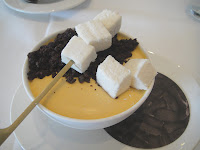 For dessert, I ordered a popular choice.  It was a creamy smooth salty caramel pudding with homemade marshmallows and dark chocolate crispy crumbs. 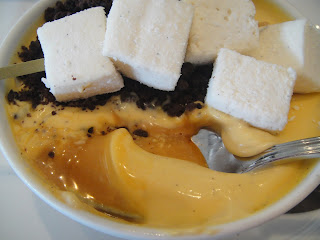 See close up of pudding below. 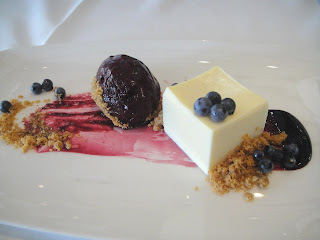 Our other friend ordered this artistic delicious dessert which she said was delectable as well!
With such clean visible kitchen, a changing menu, and creative new dishes not usually found elsewhere, I definitely recommend it.  It was worth the trek. ﻿ ﻿
﻿ ﻿