Hands down, Laduree for me has the best macaron.  These are macarons - not macaROONS.  A macaron is made of egg whites.  They are like 2 delicately baked cookies that are crispy outside and moist inside.  Each cookie (the macaron) are put together like a sandwich with a delectable filling in between them.

It all began in 1862, when Louis Ernest Ladurée, a miller from France’s southwest, created a bakery at 16 rue Royale in Paris.

These small, round cakes, crisp on the outside, smooth and soft in the middle, are the most famous creation of Ladurée.

The story of the Ladurée macaron starts with Pierre Desfontaines, second cousin of Louis Ernest Ladurée, who at the beginning of the 20th century first thought of taking two macaron shells and joining them with a delicious ganache filling.

Many have created macarons which I have tried in the last 25 years.  There have been some macarons I've tried from New York, Tokyo, and Manila too besides other states.  If I don't have a Laduree macaron, some macarons have met my expectations.  In fact, I liked the bacon macaron at Hester Street Market which I featured earlier this year.

But Laduree is special - after all, they are the ORIGINAL creators of the macarons.  I was glad to go there when they first opened.  The line was very long and they kept the doors open past their closing hours.  Locals were puzzled of the line.  I heard one man comment that it was silly to line up for a 'candy'.

Here's what the new and first Laduree shop in New York City (and the US for that matter) looks like: 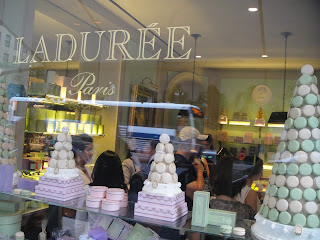 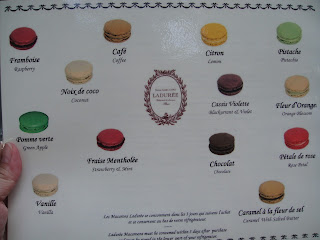 The colors of the Laduree macarons are very vivid like jewels.  Their flavor is intensive as well.  They do have featured flavors.  And for their openning 3rd week of August, they featured green apple.  I must say, it was my favorite and most differentiating flavor of all the macarons I've tasted compared to others. 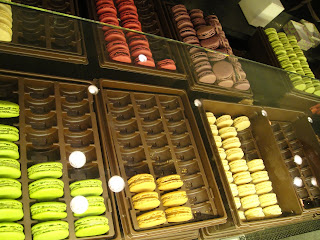 Currently, Laduree flies their macaron over the day they are made.  As soon as they find a place to make them, they are freshly flown from Paris. 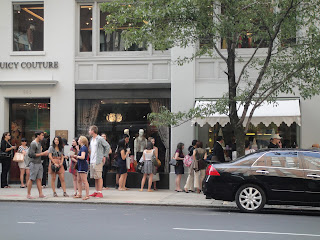 I love desserts.  These are made of eggwhite and they are small.  I do think a serving of one or two is a perfect size for a dessert.

LADUREE SHOP is located:
864 Madison Avenue
New York City, NY
Between 70th and 71st streets on the west side of the street
http://www.laduree.fr/en/maisons/monde-details

Rambutan is a seasonal fruit that originated in Malaysia and spread out through its neighboring Southeast Asian countries like Thailand, Vietnam, Philippines.  But these ones are grown in Florida.

Rambutan is seasonal which is why I am featuring it today - month of September.  I have started seeing them in our Chinatown area from grocery stores to street vendors.  I would therefore like to share with you how to eat this delicious fruit so if you see them in the grocery stores at this time of the year, you would know how to eat them and savor its very sweet taste.

Rambutan is rich in Vitamin C, iron, Vitamin A, beta carotene, niacin, and fiber.  The skins contains flavanoids thought to lower cholesterol and anti-oxidant to fight cancer.  However, we do not eat the skin.

http://factoidz.com/the-tropical-fruit-rambutan-its-nutrition-and-culinary-uses/
Please watch the video below demonstrating how to eat the rambutan. 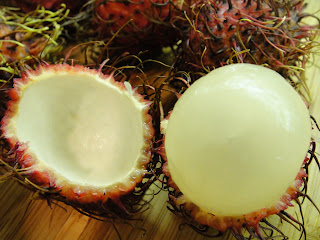 Enjoy a rambutan today.  It's a good dessert.  Sweet and nutritious!

Don't forget - this is seasonal so try looking for them soon.

Email ThisBlogThis!Share to TwitterShare to FacebookShare to Pinterest
Links to this post
Labels: Seasonal Fruits dessert rambutan healthy how to

New York City is coming up with more and more new ice cream stores made locally.  They're sprouting up like cupcake stores.

Here's the latest find.  This one's located in Hell's Kitchen nearby my favorite bread store Sullivan Bread on 47th Street between 10th and 11th Avenue.

I noticed the sign sticking out of the tiny store.  They're open till 9:30 PM so I first went to pick up my loaves of bread. (That's another topic to cover)

je & jo is a hand-made ice cream layered with all natural cookie dough made from scratch.  The dairy they use is organic - cows that graze above the Hudson Valley.  Even the containers are made of an environmentally friendly compostable sugar-cane base.  Their spoons are wood with their name on it.
je & jo ice cream
515 West 47th Street
New York City
Open 7 days a week
12:30-9:30PM
www.facebook.com/pages/Je-Jo...Ice-Cream/138022996233979

Beauty Pageants: Oprah Winfrey comment about Miss Universe 2011 and...: “‘I have reservations with the results. If the only basis is the Q and A portion, after having been trimmed down to 5, Ms. Philippines des...

Posted by foodyholic at 2:44 PM 0 comments

For today, I decided to  make something light and very easy as our vegetable side.

From Japanese groceries and gourmet super markets like Whole Foods, one can find shishito peppers.  This time, I bought my shishito peppers and padron peppers from our weekly Green Market in our neighborhood. 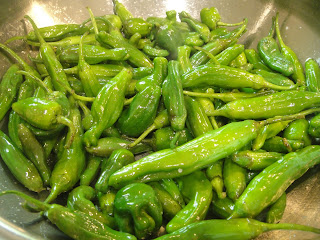 Simply heat up pan, pour the olive oil in medium high heat.  Drop the washed peppers and saute for 3-5 minutes till they start blistering - waiting a few seconds for each stir making sure that the peppers get some blisters.  When mostly blistered but still nice and green like the photo above.  Remove from heat and add about 2 tsp of sea salt, mix in well and serve immediately.

For more information on the benefits of eating peppers, follow the link:
http://www.whfoods.com/genpage.php?tname=foodspice&dbid=50


This evening, as I stepped out of Bergdorf Goodman, I saw a food truck parked that looked interesting.  You see, I now know how to spot a cool food truck from a regular food truck.

Lucky me, tonight there was no line except for one person. And here's what they had: 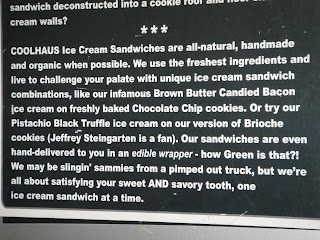 I read the above and made up my mind to order their infamous Brown Butter Candied Bacon ice cream on freshly baked Chocolate Chip cookies with their edible wrapper. 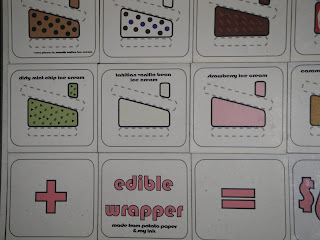 On the left is their board of flavors to choose from.  You can order your ice cream either in a cup or between chewy tasty double chocolate chip cookies.  I highly recommend it.


They don't stay in the same spot everyday.  They recommend you join them on Twitter to follow where they are so you can have your ice cream treat.  Sometimes, they are on 15th Street by Union Square as well.

Many offer wine and even champagne when you step into their shops.  One of the designer stores had a stage outside for the Radio City Rockets of the Radio City perform.  There were also models at Rockefeller Center like the one below.
What Fashion Night Out would be complete without some food.  At Henri Bendel's they dedicated their 3rd floor to food available at Hester Street Market - a Saturday destination in Spring through October in the Lower East Side of Manhattan where one discovers new food purveyors starting up their business.  I was getting hungry so I was glad they had food on this floor even if I had to buy it.  I got myself a meatball slider with Jalapeno onion sauce and strawberry lemonade. 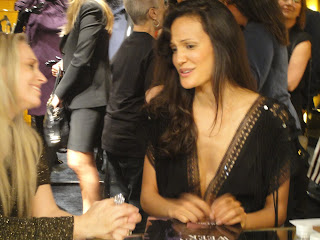 
For more on Fashion Night Out September 2011:
http://fashionsnightout.com/

Shrimp is one of my favorite seafood to eat.  I like shrimp best when they're freshly caught and still with heads on.

Wash whole shrimp.  Pour 7Up or water into large wok or boiling pot and add the 1 cut up scallion stalk and the sliced ginger.  When boiling, add the shrimp, cover and cook just until it turns orange.  Remove from heat immediately and drain.  Approximately 10 minutes or less.

Mix together in a small bowl, the vinegar, minced scallions, minced garlic and soy sauce as dipping sauce. 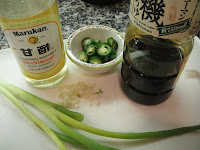 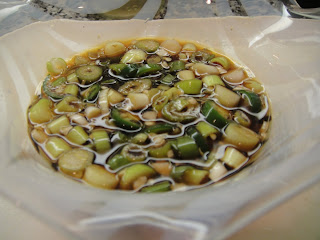 The ingredients on the left makeup the dipping sauce on the right.

Optional: minced hot peppers.
This is what we had for dinner the eve of Hurricane Irene.  I figured if we run out of power, we might as well eat the shrimp while fresh.

Here's what you can eat from the shrimp's head:

Shrimp can be part of a heart-healthy diet. The crustaceans are low in fat and calories while providing protein, phosphorus, iron and vitamin B-12. Shrimp also contains a significant amount of cholesterol. The type of cholesterol in shrimp, however, may not have a negative impact on your health.
Read more: http://www.livestrong.com/article/436910-are-shrimp-a-high-cholesterol-food/#ixzz1XCo2t8mT

Posted by foodyholic at 4:18 PM 0 comments

Yesterday, I went to do my weekly grocery shopping.

As usual, I was at Whole Foods Market at Houston Street, NYC.  I've always ignored to try their array of ready made desserts; but not yesterday.  The bread pudding looked like it was made of good bread.  As I perused the ready-made dessert area; I saw creme brulee.  I also saw some apple shortcake.

An idea came to my head to buy a little bit of each and combine them to make a new dessert.  Here's a quick idea for you to try.  I classify this as comfort food. 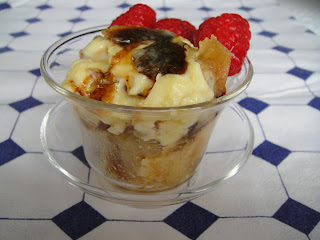 Another variation of the dessert was adding fresh strawberries on top.  It's an easy after dinner dessert and was delicious!  So easy, that I'm looking forward to have some company to serve this.  My family liked it too.
Posted by foodyholic at 2:30 PM 0 comments

Tamaraind is a tropical tree, native to eastern Africa, including parts of the Madagascar.  Tamarind was introduced into most of tropical Asia, Latin America and the Caribbean. The fruit is a brown pod-like legume, which contains a soft pulp and many hard-coated seeds.  In Asia and Latin America, tamarind can be used in cooking, turned into beverage, or can be eaten as a snack or dessert.  Did you know that tamarind is an important ingredient in Worcestershire sauce?


Tamarind also comes in paste form which can be bought to use as condiment in soups, and dishes.  Some top chefs add them in their continental dishes to enhance the flavor of the dish.

If you would like to try eating them as a fruit, below is my video demonstrating how to eat them.  I I like the taste particularly  for their semi sweet and tart taste.  These particular ones in my demonstration are sweet.  It's like eating plums with a paste-like texture.

Please watch my video below:

There are benefits from eating tamarind. The pulp is rich in calcium, phosphorus, iron, thiamine and riboflavin and a good source of niacin.

For more on Tamarind, you may follow the link.

Email ThisBlogThis!Share to TwitterShare to FacebookShare to Pinterest
Links to this post
Labels: Eating exotic fruit, Healthy fruit How to cut or How to Prepare
Newer Posts Older Posts Home
Subscribe to: Posts (Atom)