SQUAB Dinner - How to cook

From Wikipedia.org
In culinary terminology, squab (probably of Scandinavian descent; skvabb, meaning "loose, fat flesh")[1] is a young domestic pigeon or its meat. The word squab was formerly used to describe young birds from several species, but has since come to mean young pigeons and their meat.[2][3] Squabs are raised to the age of roughly a month before being killed for eating;[3][4][5] they have reached adult size but have not yet flown.[3] The practice of domesticating pigeon as livestock may have come from the Middle East;[6] historically, squabs or pigeons have been consumed in many civilizations, including Ancient Egypt, Rome and Medieval Europe.[3]

Probably one of my favorite dishes - besides duck, foie gras, smoked salmon (has to be the right kind), and caviar.
INGREDIENTS:
Squab
Packet of Asian Roast Duck seasoning (found in many Asian stores)
Safflower oil
scallions
Cilantro leaves
Wedges of lemon 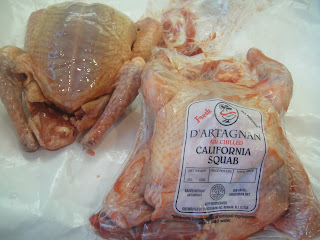 Wash the squab and season with Roast duck seasoning. Then brush with oil. 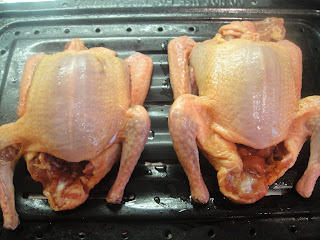 Place squabs on roasting pan and bake at preheated oven at 350 degrees Fahrenheit for approximately 40-45 minutes.  Remove and let sit for 10 minutes. 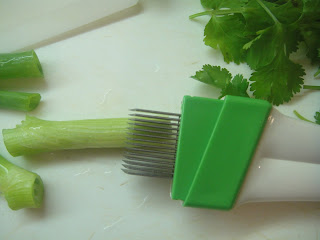 Meantime, cut up the scallions about 1 inch length and slice half way

*Done right, it must be moist and juicy inside.  Let sit after cooking before serving. Don not overcook.
You can also mix some salt, pepper, ground 5-spice of equal parts mixed on the side for seasoning on top when served.
Posted by foodyholic at 12:09 AM