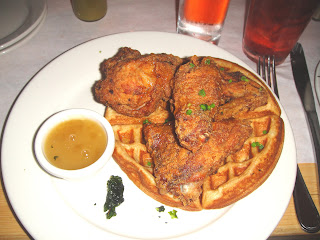 Clinton Street Bakery was started by Neil Kleinberg and Dedeh Lahman in 2001.  Their first and foremost intention was to be the best bakery in town.  With their baked goods, they also serve delicious and outstanding pancakes and waffles for breakfast or brunch.  They became known in the neighborhood which to this day you will see lines form on weekends practically all the time.

Clinton Street Bakery is also open for dinner.  Tonight I ordered their famous fried chicken on waffles.  Although it was fried, I actually didn't think it was that greasy.  But if you happen to be one who avoids to eat chicken skin, then it will be greasy for you.  The skin helps keep the chicken juicy and tastier.  As a foodie, if it's really worth trying, I would eat it.  I selected their Award winning fried chicken served on top of waffles.

And it's National Chicken Month so today, I had to have the Award Winning Buttermilk Fried Chicken from Clinton Street Bakery.

I am conscious of my diet so I ordered their fried kale.  It's to die for!  I have never had kale so light and yet crisply fried. 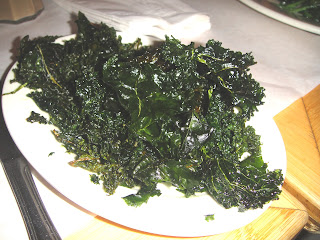 The picture of the kale on the left doesn't look fried but it was.  The texture is so light - they are like green snow flakes!

Clinton Street Bakery is located in the Lower East side - a few steps south of Houston Street on Clinton Street.  The street has other interesting restaurants around it as well as shops.  So, while you're waiting, feel free to roam around and explore.  That's how I find out more places to go to.

﻿TIP:  For weekend brunch, lines could be an hour long.
http://ourfriendben.wordpress.com/2010/09/01/national-chicken-month/

And since it's also Ice Cream Month, we stopped at Il Laboratorio for some ice cream.  I had chocolate-orange gelato and a scoop of cucumber sorbet.  So good on a hot summer day.
http://en.wikipedia.org/wiki/National_Ice_Cream_Month