I have been to Zum Schneider - a German Restaurant in the East Village, a few times.  It seems that each time I return, the food gets better. This is one German Restaurant that I like here in the United States; - and believe me I've tried quite a few of them which were highly recommended.
Zum Schneider has an A rating which you'd like to see posted on the door of a restaurant in New York City assuring you that the health department has graded it with satisfaction for following safe sanitary procedures. The atmosphere is casual and the food is quite good and fresh.  They are noted for their beer as well.  In fact they serve 12 German beers on tap.
Even I, who normally do not drink beer enjoyed a beer they had available that day. 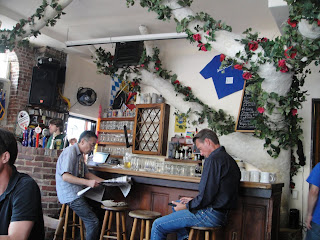 And below are their specials for the day menu.  We ordered quite a few choices at our table and shared it. 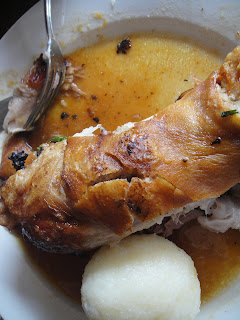 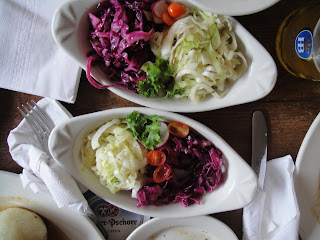 The red and white cabbage on the left is the side dish that comes with the order of Haxn - the roast pork shank.  We ordered 2 of them because it's our favorite. 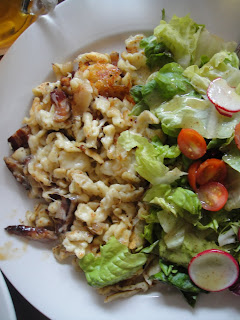 We are at a German Restaurant so we ordered their special spaetzel with bacon and cheese accompanied by a salad with a delicious light sweetish dressing. 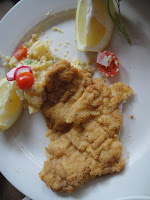 We also ordered the Veal Schnitzel which was lightly breaded.
Not in photo:  Green cabbage w/ garlic, ginger & crispy quark-potato dumplings is another dish you have to order.  It's really delicious!
For dessert, we had the apple fritters cooked in beer batter, below. 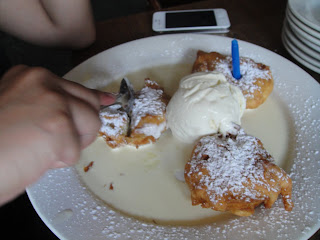 This would be a great place for Oktober Fest!