"Complex, compulsively delicious" is the description that has been posted for this modern Peruvian restaurant.  Opened just a few months ago in New York City, it has branches in Lima Peru, Mexico, San Francisco, Sao Paolo, Panama and Santiago.

My neighbor and I decided to try it for lunch after having heard so much about it.  We sat right next to the center of the open space on the second floor.  Until I had taken this photo, I did not realize, it could look like an eye:

As a cebicheria, we had to try their version of the national dish of Peru - Ceviche or Cebiche.  It is made with fish and shellfish, briefly marinated in "leche de tigre" 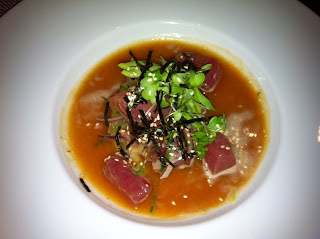 The Cebiche on the left is made of shellfish and fish marinated in leche de tigre or leche de pantera.  It is a Peruvian citrus (lime) based marinade with onion, salt, pepper and spices.  This had some seaweed on top. 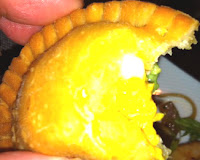 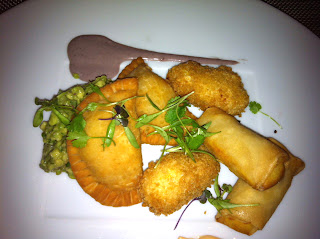 We had to try their Aji de Gallina Fritters:  empanada, tequeno and croqueta with mashed avocado, rocoto cream and olive sauce.  They serve 2 of each for $14.  Not bad when you get a chance to taste 3 different things for 2 people.
The empanada was creamy inside with meat. 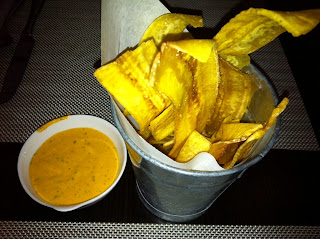 I shouldn't forget that they have crispy plantains (instead of French fries) served with a mayonnaise based sauce.  It's quite good.
If you like sushi, or cebiche, this is the place to go.  They also have meat dishes.  The restaurant mainly serves seafood.  We liked this restaurant.
http://www.yelp.com/user_details?userid=seGbuDQHjihE7TE29cQYWw
lamarcebicheria.com

Victoriano López, Gastón’s most trusted partner in the kitchen who has worked at his side for 17 years, serves as Executive Chef at La Mar NYC.

Chef Victoriano was born into a humble family in the Andes, and at age 18 he went to Lima to work for an uncle as a street vendor. Victoriano landed a job at Astrid&Gastón, where Gastón discovered and developed Victoriano´s talents in the kitchen, consequently he swiftly moved through the culinary ranks. Victoriano has held many positions in Gastón’s various restaurant kitchens, and has become his most trusted partner, overseeing the openings of new restaurants around the world. In addition to Gastón’s restaurants, Victoriano has trained in the kitchens of top restaurants around the world, including Cellar de Can Roca, Mugaritz, and Arzak, and his next project is to serve as the representative of Peruvian cuisine and culture at La Mar in New York.
A MUST TO TRY!

Posted by foodyholic at 6:44 PM