Yes! I recently had dinner at Le Midi after they've opened about 2 weeks.  The scaffolding that surrounds it did not make it easy for me to find.  But fortunately I went up the ramp to read the menu posted on the glass window when a lady opened the door to greet me.

Yes! I found the restaurant.  It has a giant screen on the left as you enter with black and white silent movie playing.  The Chef was from Larry Forgione's An American Place.

The menu is striking! It combines Chef Smith's country-French style dishes with Italian and American twists.

Here's what I ordered: 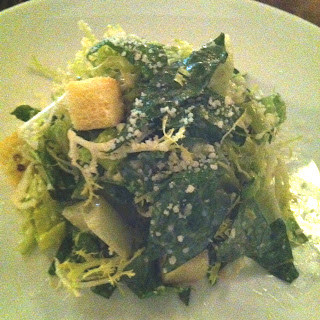 This is a very generous rendition of a Caesar's salad but in small portion (which I like).  He combined it with some frisee (usually Romain lettuce), lots of grated cheese, homemade croutons of lighter bread yet crisp, and chunks of pork lardon or chunky pork bacon - homemade and not cured.
﻿﻿
﻿

This is a place I highly recommend.  They present value, flavor, creativity and the price is fair for what it has to offer. I am a cook and I know what it takes to prepare and assemble the dishes I just had.  I appreciate going out to spend a little to treat myself.  The calibre of his food is not as exorbitant as some places that simply add a chandelier, a name, a stuffy maitre'd and uniformed mascots to serve.

What to wear? Casual and trendy.

Posted by foodyholic at 4:05 PM