Per Wikipedia:
A king cake (sometimes rendered askingcake, kings' cake, king's cake, or three kings cake) is a type of cake associated with the festival of Epiphany in the Christmasseason in a number of countries, and in other places with the pre-Lenten celebrations ofMardi Gras / Carnival. It is a popular food item during the Christmas season (Christmas Eve to Epiphany) in Belgium, France, Quebecand Switzerland (galette or gâteau des Roisor galette des rois), Portugal (bolo rei), Spain, and Spanish America (roscón or rosca de reyes and tortell in Catalonia), Greece and Cyprus (vasilopita) and Bulgaria (banitsa). In the United States, Carnival is traditionally observed in the Southeastern region of the country, particularly in New Orleans, Mobile,Pensacola, Galveston, and other towns and cities of the Mississippi Gulf Coast. In this region, the king cake is closely associated with Mardi Gras traditions and is served throughout the Carnival season, which lasts from Epiphany Eve to Fat Tuesday.
Therefore, I decided to compare Sucre's if New Orlean's King cake with 3 of the traditional French versions: 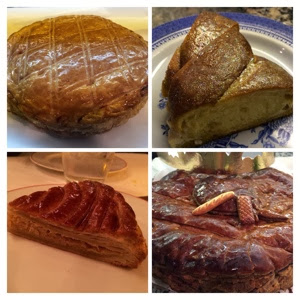 Above:
First King cake on the top left corner is my favorite from Laduree.
On the right hand top corner photo is New Orlean's version of King cake from Sucre.  This version is like a brioche dough filled with sweet cream cheese.
My conclusion is that the French Version are all flakey like a croissant filled with some type of marzipan based filling; except for Eric Kayser's Boulangerie which filled it with apples plus some marzipan. (As explained to me by the sales person when I bought it). All have surprise charms in it. And whoever gets the charm in their slice is King!
The sliced flakey King cake was from Benoit which was close to Laduree except Laduree's filling seemed a bit more moist.  Which is why it is my favorite of them all.  And my 2nd favorite is the one from Sucre which is a different recipe from the traditional French King cake. A little sweeter but it was moist.
I wish I could check out the King cake from Portugal and maybe even in Bulgaria and see how they make them.
Whatever the other versions may be, these cakes traditionally only appear in January - except for New Orleans - they're available through Mardi gras.
Posted by foodyholic at 8:02 PM