This recent Christmas, after hearing about Mangalica pigs, I found a purveyor where I could buy the ham.  I like Jamon Iberico de Bellota pata negra but I wanted to try something else.  I wanted to find out what the latest is in Spanish hams.  The links below will tell you more.  But what I would like to share here is when you actually buy the entire ham and serve it at home.  How do you cut it properly to serve it!

I found out the hard way that having this whole ham at your home is a commitment.  It developed into a new project for Christmas.  I have always wondered if buying the entire ham is actually money saving and remain to be a treat given the fact that we now have the entire 16-17 lb of premium ham in my home!  So far, after serving it to my family for Christmas as the main appetizer (yes appetizer), I have not tired of it.

The Mangalica ham is less salty than most I have had.  It is actually very close to Jamon Iberico de Bellota Pata Negra.  Maybe because pig also eats natural food and roams around - free grazing.  They do not add sodium nitrite to make it into ham.  But I found out that it takes almost 4 years to make ham out of it.  It is fatty so I now realize how much I have to throw out.

Initially, it may sound less expensive than the most expensive ham; but I am beginning to think it is probably in par as to the cost of one because of the amount of fat I discard.  No wonder when I buy Jamon Iberico de Bellota Pata Negra, sometimes I request for the man to remove some fat.  He always says it is what makes it taste good.  Taste good or not, I think it’s really not to waste too much.  That is my own take on this.  Buying an entire ham gives me a chance to analyze the situation.

I then bought the rack to rest the ham before it came because I was worried how to store it and how to cut it right.

At first, I thought with my having more than 10 knives of top qualities at home I certainly was enough to find one that would do the job right.  Wrong!

On Christmas Day, I struggled to make paper thin cuts of ham to serve.  My sister commented that they could see my muscles as I struggled!  I tried 3 different knives all very challenging.

Finally, after New Year when we came back from our trip, I decided to go to DeSpaña, a Spanish store I go to in SoHo.  I asked them where I could get a knife to slice my whole ham.  Apparently they did sell them.  I bought the same kind they use.

Low and behold!  Tonight, I flipped the ham over and started a new side to slice from.  Unbelievable!  It was like night and day!  This new knife that professionals use is so easy to use!  He actually described to me why getting this knife will make slicing my ham a cinch!  First it is thin.  Second it has no pointy end to hurt anyone by accident.  It is also flexible because it is very thin.  And Third, there are little dents in the knife which allow my knife to glide through the meat!

Now, with all these gadgets, I am ready to buy another entire ham again in the future.

Below are photographs of my ham, the rack, and the knife.  How my slices looked when I used my knives at home compared to the slices I made with the appropriate and designated knife for ham like this. 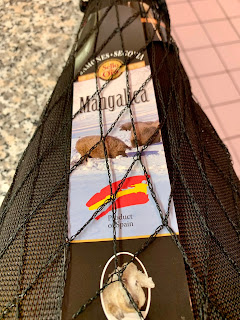 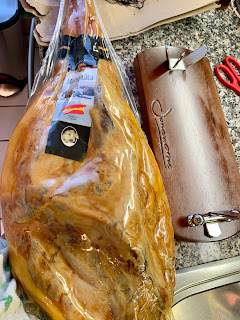 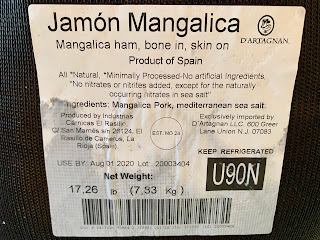 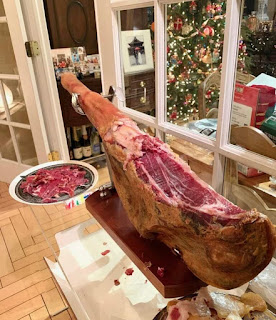 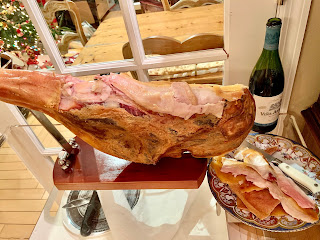 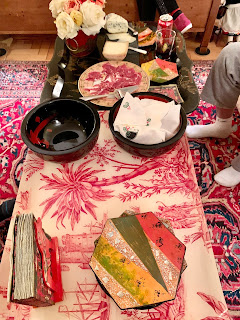 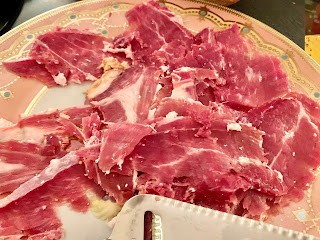 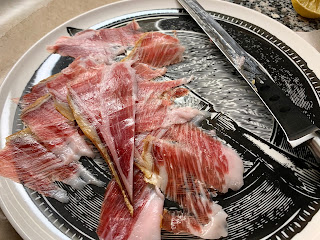 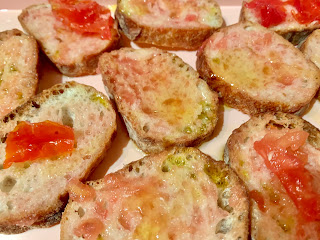 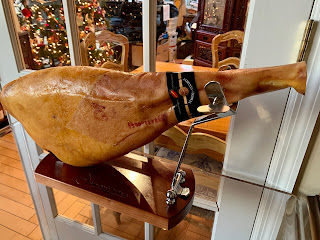 As you can see, there is a difference between the slices made with my home knives I kept trying on Christmas Day.  But the black plate shows how one should cut the ham (paper thin) and look at that perfect knife meant for this type ham!

There you go!  And now I am a Mangalica or Mangalista ham fan!  I don’t tire of it.

By the way, you have to Viber the ham meat with the fat you trim off so the ham does not dry out and get hard.  But if you. Red to turn the ham upside down, the fat won’t stick to meat so the ham specialist at the store suggested I brush the meat with olive oil.

Posted by foodyholic at 9:46 PM