I have been posting my food in Instagram only because staying home and working has really kept me super busy at home!

Between attending office meetings by Zoom, doing laundry, cleaning and cooking 3 meals a day I have found this 4th week going 5th finally able to catch up with other things I like doing such as sharing what’s new with me - which may be the same with you!

One of the breakfasts requested of me to make is Huevos Rancheros.  Which I now make with canned retried beans and salsa sauce which can evolve into a Shakshuka sauce.

All you do is buy a can of received beans - of your choice, and a salsa of your choice.  The seasoning on top do change it from Huevos Rancheros (Mexican dish) into Shakshuka - a middle eastern dish. 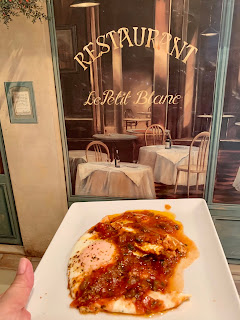 Above is the 2 eggs which I fried in oil I’ve oil, poured the same sauce I used for the Huevos Rancheros below.  The above is the Shakshuka satyoe eggs.  I like using my print photo of a French restaurant to inspire me to think I was eating in a restaurant. 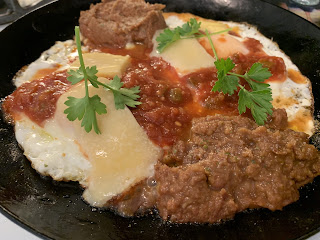 Above is Huevos Rancheros made with the same salsa sauce above without the Shakshuka spices in it.  And the Huevos Rancheros is served with regrows beans - the mushy mixture on either end plus some cheese on top of your choice.

The Shakshuka style eggs pair well with Moroccan lamb sausages and some harissa as spice sauce on the side.