Although we have a big Chinatown in Manhattan, last weekend, I decided to explore Flushing Queens, New York, for its Chinatown; particularly the New World Mall.  I was happy to discover that it was very close to the last stop of the #7 train.  A friend of ours had talked it up so I was curious to see it for myself.  I was in for a great surprise!  As soon as I stepped in the mall, I felt as though I was suddenly beamed down into another world!

The mall has three floors and a basement with a big food court.  I was transported into Asia (mostly China) with restaurants galore.  Except for the 2nd floor, the entire building including the basement, was dedicated to food!  A foodie's heaven. (NOTE:  I have a quick recipe below) 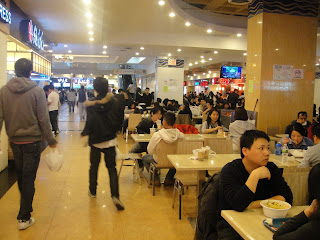 Our first stop at this food court to try was the grill place below. It's easier to remember it as Food Stall #16.  It's where we had the sticks of various foods of your choice for $1/stick.  (Unbelievable for New York City)They came in a variety of seafood, beef, chicken or lamb and vegetables. 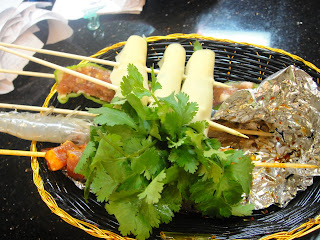 I selected skewered shrimp, seasoned lamb, stuffed long thin peppers with seasoned pork, and wrapped cilantro.﻿﻿﻿﻿﻿﻿  They were all very well seasoned with Xian type condiments.  The taste reminded me of Szechuan food I had in Xian, China except that these were grilled.
﻿ ﻿At New World Mall, some of the shops make their own noodles and buns.  Below are some of the videos I took:  This one was Tianjin Foods where we ordered the bun with chives and pork.  Watch her make it!


First, the man above made the noodle.  Then, she steps in to continue and stuff it.  Note:  She also tasted the filling before stuffing them in to make sure it tastes good!

﻿ Above, she's preparing the dough to put the chive pork mixture  (bowl of greens on the left) into it.  It is then fried on an oiled oven skillet.


Above, watch the man make the noodles.  It reminds me of a pizza maker except this looks like you need a lot more muscles and precise movement to make the noodles.  By his slamming and stretching, the dough splits in multiple strands to become noodles.


And he does it again and again! 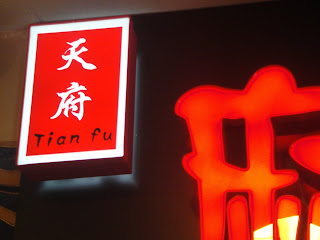 Another interesting place was the Seafood bowls of food at Tian Fu.  One selects from an assortment of seafood to use from lobsters, cut up fat crabs, to tofu, mushrooms, and vegetables.  They sell the lobsters by the pound.  They cook it for you and serve it in a huge tin bowl.
﻿ Also called Spicy Wok. 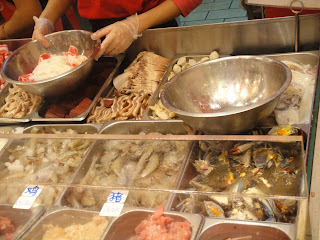 Seafood of your choice is placed in a bowl to be made into soup with Chinese condiments that again remind me of Szechuan or Hunan style cooking.  They serve the soup dish in a silver bowl as you see them on the left.  They are very big! 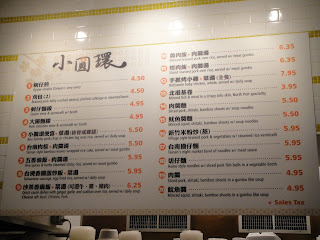 Then, we went over to the Taiwanese food stick stall. 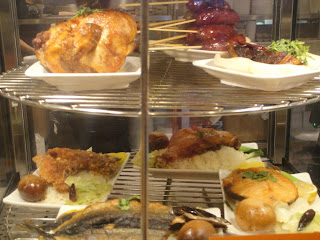 Above is an assortment of food found at the Taiwanese food stall. 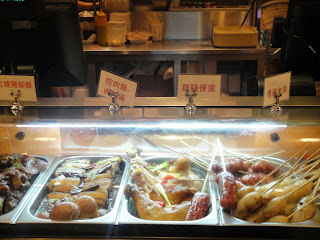 Notice how the signs are mostly in characters.  Although they have a menu board above, it is still pretty challenging to make one's mind a pick the food you want. It's really another world!  Fortunately, they all look good to eat.  Pointing at something may be the best way.  That's how I did it when I selected the foods to grill at the grill area #16.
After our meal, we went down to the main floor for some supermarket adventurous hunt.  Below, we found some geoduck clam.  This is more than a pound so it's actually a very good price.  They also had very fat crabs.  This is something you buy at their market to take home and cook yourself. 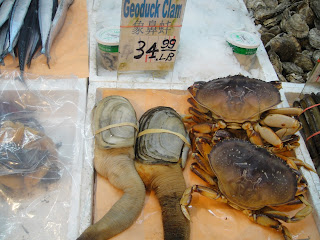 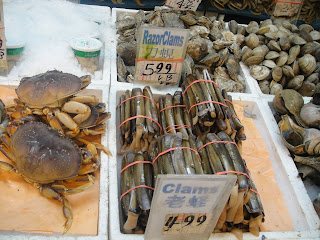 One can actually cook them with garlic and olive oil.  Then sprinkle it with minced parsley.  It's so delicious!  First, quickly blanche the razor clams; then, brush them well with olive oil mixed with minced garlic (or olive oil that has been soaked with garlic to get a strong garlic flavor). Open the razor and lay them shell up on a hot griddle.  You can put a large heavy pan on top to flatten the razor clams open.
I hope that I've given you an idea of what you will see under one roof at The New World Mall at Flushing Queens.  If you're like me, I'm never contented to have the same thing to eat and go to all the time.  With over 7000 restaurants in New York City, and various openings and closings of restaurants, why would you go to the same place all the time??  That's what I like about this city.  It's always changing and things to try is endless.


Hello there! I just want to give you a big thumbs up for the great info you have right here on this post. I'll be returning to your blog for more soon. gmail email login