Cinco de Mayo commemorates the victory battle of Mexico against the French Army in The Battle of Puebla  in 1862 after their independence from Spain in 1821.

The celebrations of Cinco de Mayo in the United States began around the borders of Mexico and the US.  Eventually, areas heavily populated of Mexican heritage began to celebrate as well through parades and Mexican foods.

In the past, I used to make tacos out of Taco mixes that come in a box.  Lately, I have developed my own version which reminds me of trips to Mexico. 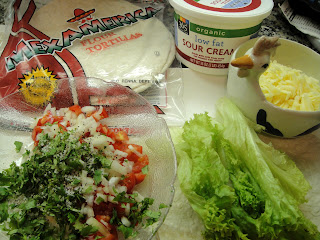 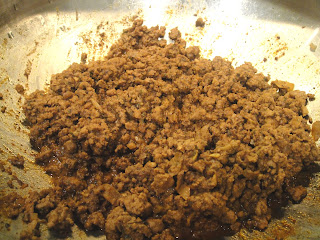 In a wok type of pan, in medium heat, add oil to saute the garlic and onion until the onion becomes translucent.  Add the ground meat (pork or beef).  Add the cumin, chili powder, and salt, pepper to taste.  Saute lightly. When it begins to dry, add the broth (beef, chicken or water).  Turn down the heat to low and cook till liquid slightly evaporated.

Meantime, prepare your garnishes:
Mix together the minced cilantro, onion and tomatoes.  Chop the lettuce.

Chop the avocado and squeeze lime on it so it doesn't turn brown.

If using soft fresh tortilla, you can microwave covered with wax paper or another bowl or plate on top for 1 minute.


To assemble your taco, place the flour tortilla on your plate.  First you put about 2 TB of the ground meat mixture.  You now can add your lettuce, tomatoes-onion-cilantro mixture, top with fresh cut jalapeno peppers (you can use any hot peppers if unavailable), top with sour cream and the cheese last on top.

You can now roll up your taco to eat.  You may also add Tabasco Sauce or any hot sauce on top.

Posted by foodyholic at 1:14 PM