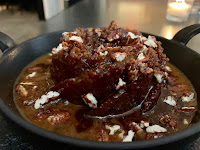 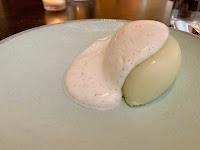 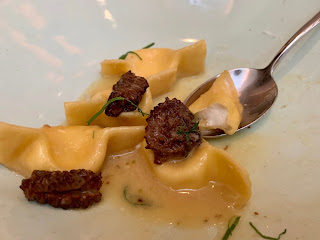 We often go out to dine.  And I always dissect how it was done.  I look at how it was put together.

Today was one of those days.  I just watched this talented chef from one of the very top Michelin restaurants a couple of years ago who left and just opened his own restaurant.  He showed how he made his grilled chicken which he brined in citrus for 35-36 hours.

I happen to have the rest of the afternoon free after our office meeting.  So I went downtown to see if I could get a seat at his new restaurant which opened sometime in March of this year..  And I did!

It is so wonderful when after you've just watched the chef on television and just read about it and you actually sit in restaurant without waiting for weeks!

When I entered, they gave me a little plate with the small bread served with labne.  The little loaf of bread was seasoned inside and on top.  It was very soft.

For my first course I tried the oysters with cucumber gelee and misonleaf. 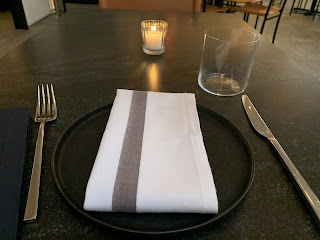 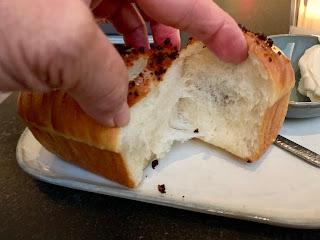 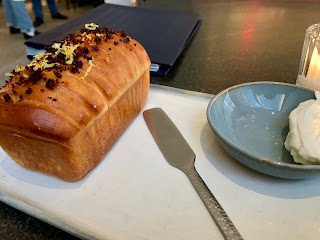 My second course was the oysters with cucumber gelee and miso.  The oysters were very fresh!

Next was the Romaine salad that he demonstrated on television this morning at the Today Show.  He made a green goddess dressing which you can get the recipe @TodayShow/food .  The dressing had spinach and was a healthy version of the green goddess dressing we all know about.  He painted each Romaine leaf with the dressing and layered it in between with some toasted bread crumbs and some shaved radishes and chervil.  Another healthy salad I learned to make.

I ordered their home made pasta stuffed with chèvre and wrapped like candy with morels on top.  The sauce was buttery and tasted something French-like food preparation.

For the main coarse, I tried the 35-hour brined chicken grilled.  It was served complete with leg attached and feet too.  I have had feet served in a French restaurant before in Paris.  This is a spicy dish served with slices of Jalapeño peppers.

To top my dinner I had to have the sticky toffee pudding  and the Satsuma Orange ice cream.  Both of which were decadent.

The Sticky Toffee pudding was chocolate with lots of toasted walnuts or pecans in caramel sauce.  It was served with Green apple ice cream and cream.  While the Satsuma orange ice cream was topped with a soft meringue and browned served with something like crisp honeycomb toffee.  This reminded me of Baked Alaska with torched meringue. 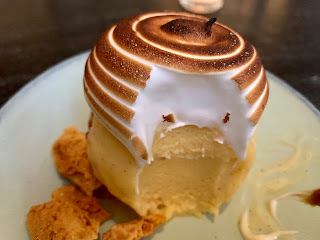 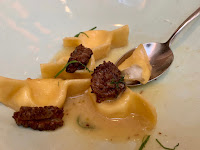 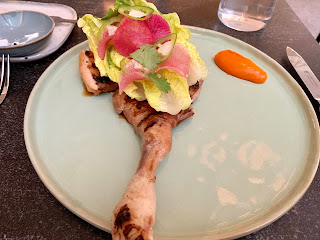 Posted by foodyholic at 1:00 AM