http://www.chikalicious.com/
The lines are too long and the cronuts always gone before noon at the original bakery Dominque Ansel?  The next best thing is to go to Chikalicious in the East Village.  They have their version of the coveted Cronuts of Dominique Ansel. 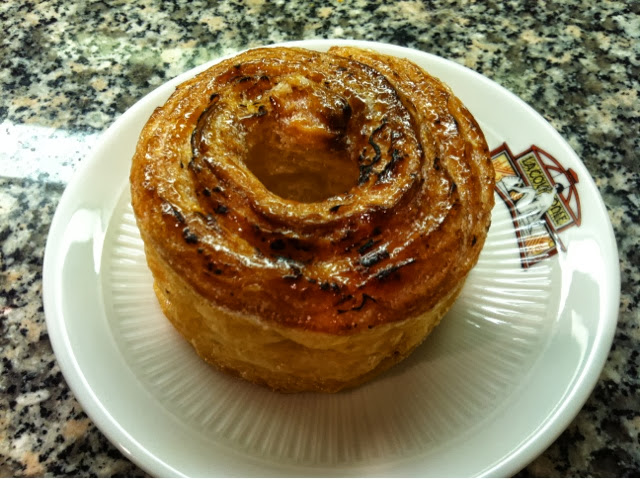 Above is the picture of their DOUGH'SSANT.  A cross between a donut and croissant filled with cream.  It comes in chocolate too but I happen to prefer the brûlée. 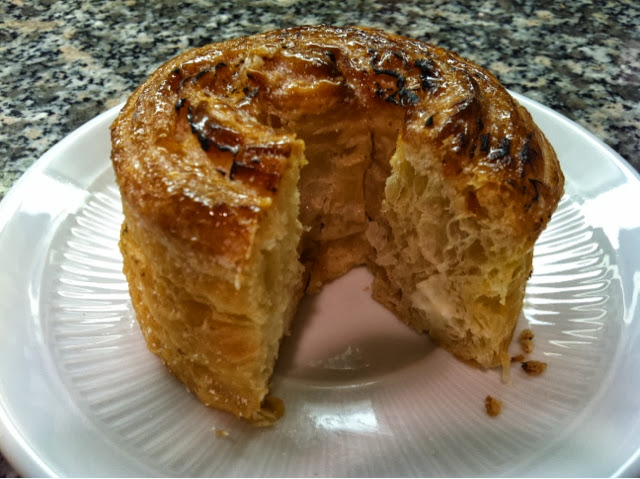 Above is the DOUGH'SSANT cut up showing the layers filled with custard.  The outside is crisp like a kouign-aman which I featured in my blog earlier this year. The brûlée is made if sugar that they torched so the dark burnt parts make an interesting taste.

The other day while I was in Koreatown, I happened to have stopped by a Korean-French pastry shop where I came across their version of a  cronut as well. 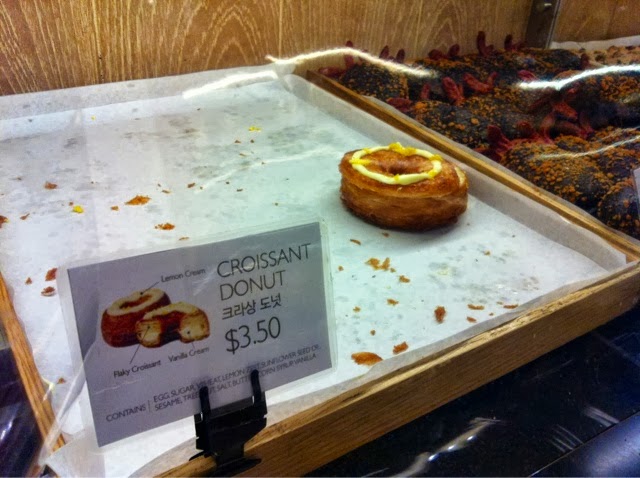 Above at Paris Baguette at Koreatown, they call their cronut-copy CROISSANT DONUT. I bought one as well to try. The CROISSANT DONUT when cut up has layers like a croissant, flakey, and filled with vanilla custard inside.  The difference I noticed is that the Chikalicious version has a softer center layer, and taste more buttery than the copy from Paris Baguette.

The two above may be the best copies of the cronut.  It's interesting that they respect Dominique Ansel by not calling their versions cronuts - which I believe is fair because the cronuts were originally conceived and made by Dominque Ansel.

Five days before, I went out of my way after a friend said I must go to this cafe on Mott Street in SoHo because they claim to have cronuts. (I will not mention the name).

I tried their " cronut".  To my super disappointment, it was nothing but a giant stale donut at $5.  After one sliced piece, we concluded that it wasn't worth the sugar to consume. I went to pay at the counter and brought the "cronut" back.  When I was asked if I needed to wrap it up; the person behind the counter got mad when I said no because we didn't like it at all.  He took the donut back and told us not to pay.  But he was angry while we were relieved.

Moral of this story: Unless  you've tried the cronuts, don't assume you've come close to making one to sell.

My take as a foodie: I think that the kouign-aman and a cronut are very close.  To me, cronuts are like kouign-aman with filling and shaped like a doughnut or donut. And since a kouign-aman is like a heartier croissant with sugar glaze to make a crispy crust, shaping it like a donut with a hole in the center can become a cronut.

Posted by foodyholic at 9:58 PM