Last weekend I finally ate at Marc Forgione's restaurant named after himself in Tri-BeCa.  Marc Forgione, is a New york native and winner of The Next Iron Chef in 2010. His restaurant is Modern American.  He uses bold flavors and very inventive - something I look for when eating out.

Stephen Wambach, who hails from Pennsylvania and the Executive Chef of Barclay Prime is now the Chef for Marc Forgione's.  It was a privilege to have met Stephen in the kitchen after our brunch last weekend. 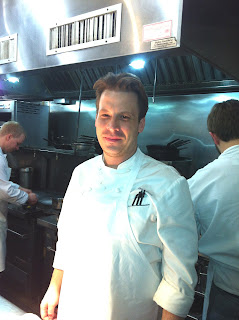 As usual, I deviated from the regular menu list, whereas my companions ordered from it. 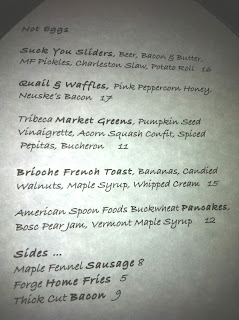 We had to order the quail and waffles.  This way I fulfill the craving for a quail and try his very light and crisp waffles. 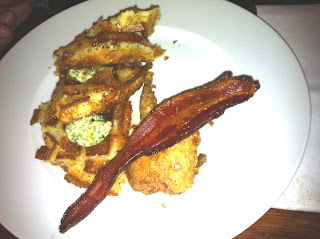 The quail is lightly battered and deep fried (I think that's what he did with it) served on the lightest crispiest waffles ever yet.  A slab of bacon accompanies the dish. 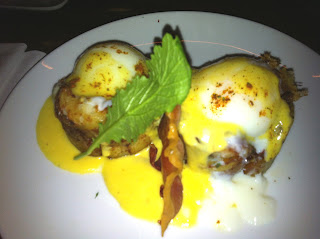 We also tried the eggs Benny on the left.  It was served over potatoes instead of the usual English Muffin.  We loved it!
﻿﻿﻿﻿﻿﻿﻿﻿﻿﻿ 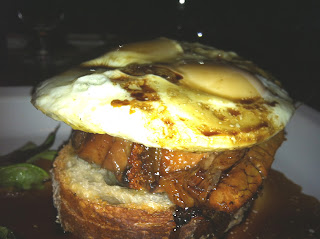 If I had more room to spare, I would have also ordered the lobster dish which was special for the day.

Will definitely eat here again.  I read that they do prepare a pig's head with crisp skin on Thursdays.  I should call in advance to make sure they're making it before I go.