Panettone has become a national symbol of the Italian Christmas, and lately assimilated into the festivities of many other Catholic countries, however, this celebrated ancient bread is a typical product of the gastronomic tradition of Milan . Over the centuries, a great number of legends have grown up around the origins of this dessert. It is said for example that a certain Toni, a Milanese baker in the service of Ludovico il Moro, Duke of Milan, invented the panettone, which was called “pan de toni”……toni,s bread in his honor.
In the 1606 reprint of ‘Raccolta delle Parole Milanesi dichiarate”, a collection of Milanese dialectical terms, edited by Giuseppe Capis, panaton was defined as a “large bread, which is made on Christmas day”. Alessandro Manzoni, a 19th-century Italian author who wrote the famous novel “I promessi sposi”, describes how Renzo Tramaglino, one of the book’s protagonists, goes in the 16th century from the countryside to Milan, where he is astounded to find ”round, very white bread” which was not usually eaten in rural areas.
www.italian-regional-recipes.com/panettone-an-italian-christmas-cake/
INGREDIENTS TO MAKE FRENCH TOAST OUT OF PANNETONE:
(serves 2)
Pannetone sliced about 1/2 to 3/4 inch thick
2 extra large eggs
1/3 c half and half
1/4 c sugar
1/2 tsp of vanilla
Freshly grated nutmeg
dash of salt
Butter for frying
Maple syrup for serving
More butter
Combine the first 6 ingredients except for the pannetone slices, in a large bowl and beat well.  Dip the slices of pannetone bread a few seconds to absorb the liquid on both sides.  Do not soak.
Heat griddle and melt 1 TB butter and spread it around the griddle.  Fry the dipped pannetone about 2 minutes on each side in  medium heat.  Remove and keep warm. 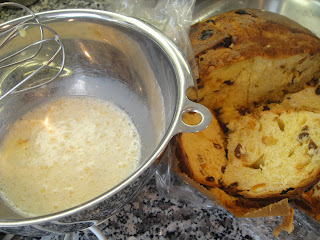 The egg mixture in the bowl next to the raisin Pannetone.  (You can use any version of the Pannetone) 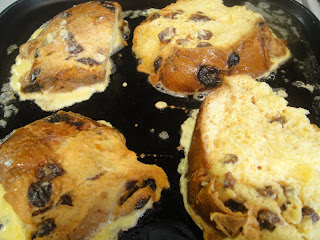 Fry the dipped Pannetone in buttered hot griddle
What is certain is that panettone developed by degrees. Made initially with simple, standard ingredients, it was gradually enriched through the addition of more sophisticated products. In the 1818 edition of Francesco Cherubini’s “Vocabolario Milanese Italiano”, panettone was described as follows. “Panatton or Panatton de Natal. A type of bread from wheat flour enriched with butter, eggs, sugar and raisins, or sultanas; the surface of the dough is cut in an almond shape so that the result, after baking, is numerous crescents. Its weight of about one kilo or more, and made only at Christmas.
Since candied fruit is not mentioned, it is obvious that the practice of adding it was introduced later. While panettone has become the symbol of the Italian Christmas, it is a delectable dessert that deserves to be appreciated through the year.
Posted by foodyholic at 12:39 AM