Harold Dieterle III is an American chef best known as the winner of Season 1 of Top Chef. His signature dish is spicy duck meatballs.  He was brought up as an Italian-American watching and assisting his mother prepare traditional Sicilian Sunday suppers in their Long Island home. 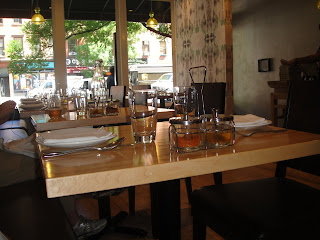 He opened Kin Shop in October of 2010 on Sixth Avenue in the West Village.  As usual, it was 2:30PM by the time I finished showing properties and I was starving.  (I'd rather starve and eat at home than grab anything to stuff myself)  Therefore, since I wasn't far from this restaurant, I decided to walk a few more blocks and caught them a few minutes before they closed.  I was in for a treat and another new discovery.

I also found out that at lunch, they have a $20 prix-fixe lunch which included an appetizer, main course and dessert.  Here's the menu: 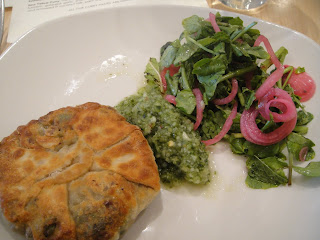 The main course they recommended was the Beef Brisket Madtarbok with turmeric, cucumber relish and watercress.  (It was more like a very good empanada with a delicate thin crust)  The cucumber relish was a good compliment and so was the slightly tart watercress salad.
Scroll down to reserve through open table if you wish.
Their restaurant is located at
469 Sixth Avenue (between 11th and 12th sts)
New York, NY 10011
1-212-675-4295