Today, Philippine Independence was celebrated in New York City earlier than its due date which is June 12.  This was to celebrate the independence of the Philippines from Spain in 1898.

After the parade, thousands of people flocked between 23rd - 26th Streets on Madison Avenue to view shows on stage and enjoy locally made Philippine food from various restaurants within the Metropolitan area.
My favorite dish was the innovative modern Filipino cuisine from Maharlika.  I bought their version of a slider.

The slider was actually a Philippine sausage - known as longanisa.  They placed it in a bun with pickled carrots, scallions, and garnished it with shrimp paste mayonnaise (locally called bagoong).  It was a good combination. 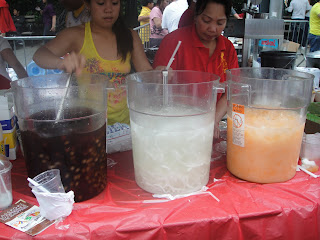 They had juices that you normally see in the Philippines.  Fresh buko (coconut juice with grated coconut meat), sago (large tapioca balls in sugary juice - not my favorite) and cantaloupe juice (the light orange juice on the extreme right) 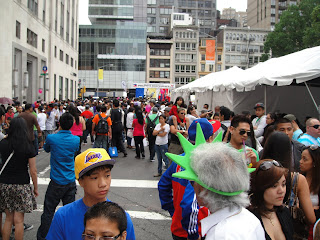 How the crowd was at the Philippine Independence Day
and watching several barbeque being cooked.
Karyll and Jericho (Philippine singers) performed.
Posted by foodyholic at 11:25 PM