I'm so excited to talk about this restaurant! Since last summer, when I first read about their restaurant's opening in Brooklyn, I had wanted to go!  First of all, I've already been to their first restaurant called Fatty Crab in the West Village of Manhattan.

I've had a busy day, so tonight I wanted a break from the stove and have some bbq.
Dashed with my bag out the door to Brooklyn! 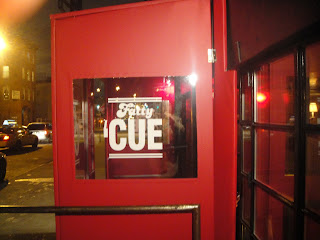 BBQs are all over the nation.  I've tried a dozen or so as far as Texas!  Many of these BBQ restaurants have succeeded to captured my taste.  However, this one has tweaked my taste buds because there was that combination that I would never have thought to combine.
American barbecue technique is married to the flavors of Southeast Asia. The congregation cheers.”

First we tried their famous Heritage Pork Ribs and added more of the smoked fish palm glaze with Indonesian long peppers:
Second, we had the 'Cue Coriander Bacon, (below) with steamed yellow curry custard, and thin triangle toast. 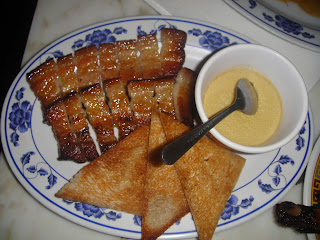 To eat the 'Cue Coriander Bacon, spread the custard on the toast and lay the pieces of coriander barbecued pork bacon on top. It's delicious!

I think the custard has coconut, ginger, garlic, onion and curry.  But there may be some other ingredients in it.

This is what makes this place interesting.  It's new cuisine.