This is a neighborhood I frequent and notice many restaurants come and go.  This year, I noticed something new in place of something that used to be there.
Late Sunday, they were still serving  brunch.  They had just been featured in the newspaper so I decided to stop by.
I ordered the newspaper featured dish the duck hash with egg and hollandaise sauce. 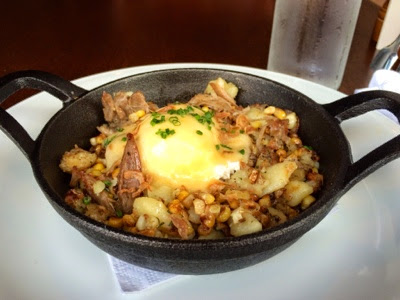 Above was the dish.  It looked good but frankly a little greasy.  It was tasty but I think I was disappointed that the hollandaise sauce seemed to have gotten cooked with the egg. I think it would have been better to have garnished the duck hash brown with hollandaise sauce after the egg was cooked separately or added more fresh hollandaise after cooking the egg with hollandaise sauce on top.  This, garnished with some sliced freshly cooked but still pink duck slices. I am not find of duck rillet; and therefore, I also don't like well done duck meat. 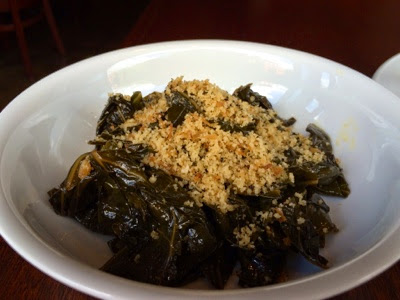 To balance my diet, I usually order a side dish of vegetable.  Above is their version of collard greens.  This was pretty tasty garnished with crumbs of bacon and crumb mixture. I think they also said it had pork belly as well.  This was more of a Southern type dish and it tasted good!
There are many restaurants in the city, this may be one I won't have to return to soon. But it's not bad. It's just not my favorite.  One time is enough for me.
It's like a chapter I have to move on to another.
CHAPTER ONE
33 Greenwich Avenue
New York, NY 10014
212-842-9146
Posted by foodyholic at 1:44 AM