Wako is an upscale department store located in Ginza.  I equate it to Bergdorf Goodman in New York City or their sister stores Neiman Marcus in the United States.  Wako has a restaurant which we stumbled on that served High Tea.  The price is similar to what one would actually pay at Bergdorf's for High Tea. 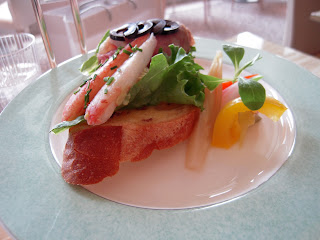 Left:  On toast was crab legs with accompaniments
If you want to shop Japan's luxury goods, Wako is where you should go and visit to shop. And while you're there, you can go and eat too!
Wakō) is a retailer in Japan, whose best known store (commonly known as Ginza Wako) is ... Wikimedia Commons has media related to: Wako Department Store ...Wako Department Store4-5-11 Ginza, Chuo-ku
Tel: 03/3562-2111
Opening Hours: 10:30am-6:00pm, Mon-Sat,
closed on public holidays